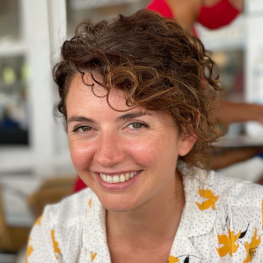 Mar Pérez-Sanagustín is  Associate Professor at the Université Paul Sabatier Tolouse III (France), researcher at the Institute de Recherche Informatique de Tolouse (IRIT), and associate researcher at the Pontificia Universidad Católica de Chile (PUC). Mar also founded the team T4DLab at PUC, and she continuous collaborating with it. Mar worked from 2011 until 2014 as a researcher at the Gradient Lab of the Gradient del Grupo de Aplicaciones y Servicios Telemáticos (GAST) at the Universidad Carlos III de Madrid (UC3M) and as a teacher of the department of Telematics Engineering, where she was with a Post-Doctoral Fellow Alianza 4 Universidades. She is a Doctor in Information and Communication Technologies since July 2011 by the University Pompeu Fabra, where she obtained the cum laude grade with  European Mention. During her PhD, Mar completed her studies with a moths stage at the LTRI group from the London Metropolitan University in London.  From November 2013 until March 2014 Mar was with a Fulbright fellow visiting the Stanford Research Institute (SRI) in San Francisco (USA). From 2014 until September 2018 she worked as a Associate Professor at the Pontificia Universidad Católica de Chile where she also was the vice-dean of Engineering Education. Currently, she is still associate researcher at this university. Her research focuses on the study of self-regulation in MOOCs, MOOC-based hybrid methodologies, collaborative learning with mobile devices and engineering education.

We use cookies on our website to give you the most relevant experience by remembering your preferences and repeat visits. By clicking “Accept All”, you consent to the use of ALL the cookies. However, you may visit "Cookie Settings" to provide a controlled consent.
Cookie SettingsAccept All
Manage consent

This website uses cookies to improve your experience while you navigate through the website. Out of these, the cookies that are categorized as necessary are stored on your browser as they are essential for the working of basic functionalities of the website. We also use third-party cookies that help us analyze and understand how you use this website. These cookies will be stored in your browser only with your consent. You also have the option to opt-out of these cookies. But opting out of some of these cookies may affect your browsing experience.
Necessary Always Enabled
Necessary cookies are absolutely essential for the website to function properly. These cookies ensure basic functionalities and security features of the website, anonymously.
Functional
Functional cookies help to perform certain functionalities like sharing the content of the website on social media platforms, collect feedbacks, and other third-party features.
Performance
Performance cookies are used to understand and analyze the key performance indexes of the website which helps in delivering a better user experience for the visitors.
Analytics
Analytical cookies are used to understand how visitors interact with the website. These cookies help provide information on metrics the number of visitors, bounce rate, traffic source, etc.
Advertisement
Advertisement cookies are used to provide visitors with relevant ads and marketing campaigns. These cookies track visitors across websites and collect information to provide customized ads.
Others
Other uncategorized cookies are those that are being analyzed and have not been classified into a category as yet.
SAVE & ACCEPT